Grace’s Story. She lived for ten weeks with Patau’s Syndrome.

Describe your situation at the time of your pregnancy and your child’s prognosis.

This was my second pregnancy and I went for the 20 week scan.  They picked up some abnormalities including cleft palate, fluid on the brain and some other “markers” as they called them that were indicating the baby had Patau’s syndrome.

I met with my gynaecologist and she explained the condition a little bit more to myself and my husband.  We were told it was a fatal condition and even the likelihood of the baby surviving the pregnancy was slim.  We are offered an amniocentesis to positively confirm the diagnosis but as there was a risk of miscarriage we declined.  We did however asked to be referred to a different hospital for a second blind diagnosis. We attended Galway University hospital and again the specialist came to the same conclusion.

Initially I was distraught.  I was worried about losing the baby and I was also worried about how I would cope with the baby if she survived with all of the problems she appeared to have and we already had four other children.

We read a lot on the internet and we also got some information from the Support Organisation for Trisomy 13/18 group.

What would you say to parents out there who have been given a similar diagnosis for their baby?

It is a very difficult situation there is no doubt about that and when you have a child with significant health issues it is hard work and does affect your family, however it was also very positive, although we lost Grace when she was ten weeks old we witnessed how precious life was we had all contributed to giving her a little bit of family life and we had no regrets. So although we all still miss her and grieve for her we are all at ease with our conscience.

Was there anybody or anything in particular that helped you at the time?

We got tremendous support – firstly our public health nurse who happened to be a Paediatric nurse so when we were at home with Grace her daily visits were a god send.  We got fabulous support from the Jack & Jill Children’s Foundation.  Financially they supported us so we could get in nurses four nights a week to care for Grace as she required 24 hr. care.  In addition there emotional support was great the liaison nurse called once or twice a week and really just offered advice etc. 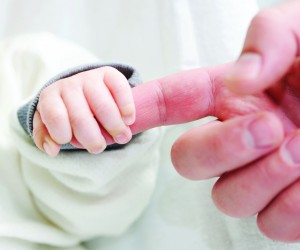