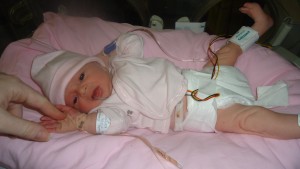 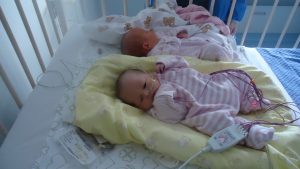 Describe your situation at the time of your pregnancy and your child’s diagnosis.

At 8 weeks pregnant I found out I was having twins I was so excited but nervous as I was only 8 weeks and I had lost a twin before, early in my previous pregnancy. At my 12 week scan the doctor said everything looked fine and recommended going for an anomaly scan.

We went for the scan at 22 weeks and it was wonderful, we got to see our beautiful babies and found out we were having two girls, and got some lovely photos too. The sonographer seem to be spending a bit more time looking at both babies hearts.  She showed us the heart of one twin and said it seemed a bit bigger on one side.  She assured us it wasn’t a big problem. She wrote a letter to my obstetrician explaining her findings.  Again I wasn’t worried as I thought, like she said it was just something small.

I was sent for a fetal Echo a few weeks later, I was 25 weeks pregnant.  The doctor explained that one of the babies heart’s had not developed properly on the right side.  I couldn’t even take in what she was saying. As I started to cry she asked if I could go to the Coombe hospital for an Echo with one of the top cardiologists the next day.  The following day, myself and my husband went to the scan, there was a number of doctors there. We got more devastating news.

The cardiologist explained that our baby had Hypoplastic right ventricle, Pulmonary stenosis, Tricuspid stenosis, and a Vsd.  She told us that our baby was seriously ill and talked of a termination.  I immediately said no way through my tears.  She said the other option and most humane was to do nothing and let her die when she was born.  She briefly talked of the 3 surgeries they could try when she was born if we wanted to go down that route.  If our sick baby got into difficulty they would do nothing and concentrate on the healthy baby, and she needed to be a certain weight if they were to do any surgery at all.

We left that scan heart broken and absolutely devastated.  I felt like my heart was going to bust out of me.  I didn’t want to think as everything they said was bad. NO GOOD NEWS.   I always try to look at the positive side, but there didn’t seem to be any.

I remember saying to my husband we have nothing except God. He has to fix this for us the doctors can’t. We asked everyone we knew to pray too. Six weeks later we had our next scan.  The scan proceeded the same as the last time with the doctor naming the conditions again, Hypoplastic right ventricle, etc.  My heart started to sink a little that nothing had changed and I started asking Jesus to tell her how to fix my baby’s heart.  Her voice started to change and she sounded more positive.  She was speaking to the other cardiologists and I didn’t understand what she was talking about.

She explained there might be something else she could do, and it would be tougher in the beginning but better for the baby in the long run if it worked and it would take some time to see would it work. They would following birth give her medication to keep the baby duct open .They would do a procedure which inserted a balloon into the pulmonary valve in her heart and open that valve and hopefully the blood would start to flow in the right ventricle and the ventricle would start to develop.

We left on cloud nine this time, our baby finally had a chance.  We prayed to keep her in as long as possible as they still needed her to be a certain weight.  I went into labour at 37 and 4 days, which was great as she was a good weight at this stage.  Everything went well and our two little girls arrived safe.  Lily was a perfect colour and was breathing on her own.  We held her for a while and then they sent her along with my husband to NICU.  Our Cardiologist came to see her.

That evening she was transferred to Crumlin as planned and had her echo etc.  Her procedure was done the following morning at a day old and went very well.

She’s now a year old and is a little joy.  Her right ventricle is growing and working properly. Her pulmonary valve is still causing a bit of bother and she may have to have balloon dilation again but she is a long way of where we should be according to the doctors.

What would you say to parents out there who have been given a similar diagnosis for their baby?Was there anybody or anything in particular that helped you at the time?

I really hope our story can give hope and faith to people in a similar situation to us.  I wish the doctors could put people in touch with others who have been in a similar situation, rather than making them feel like there is no hope at all.  We look to them as the experts but they don’t know everything, even if you don’t have faith every baby is unique if we listened to the doctors our Beautiful Lily might not be here. 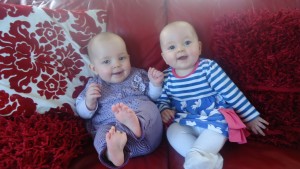