He lived for 17 minutes with Anencephaly 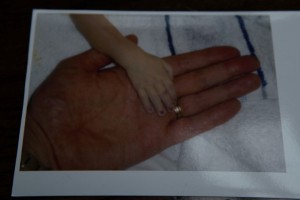 What advice were you given at the time?
Very little ‘advice’ was given at the time of our diagnosis. A lot of sympathy and compassion were given. The consultant began to explain to me that I had 2 options. I had just heard that my child’s life, instead of stretching out indefinitely before us, was going to be limited to a very short amount of time. I felt like even this short time was threatened by the talk of the possibility of travelling to terminate the pregnancy, so I asked him not to talk about it. He explained, however, that he was required to give me all my options, so I understood. He did this and saw that we had already made up our minds that this was not even a consideration for us, so he made it clear that he and the hospital would do all that they could to care for us in the weeks and months ahead.

What were your emotions at the time? Did your emotions or attitude change once the baby was born or over time?
When we first got the diagnosos, I was shocked and horrified, though not utterly surprised. I’d had a gut feeling that there was going to be something very different about this pregnancy from my previous ones and I couldn’t explain why, so now I understood why I had had this feeling. As I already described, it took a few nightmarish days to let the truth of the situation dawn on me but I came out of that with the resolve that from there on we would make the most of every day we had our son. My emotions changed over time. There was huge apprehension approaching the birth, mixed with the joy that he was still alive. It was like an emotional roller-coaster. But in general, it can be said that while we had John Paul, we wanted to make it all about him – make the most of every day, celebrate him, so to an extent I was putting my own pain aside for a time, although unwittingly.
For me then, the real pain of grief, sorrow and hopelessness came after he had died and after all was said and done. I was now left to process all that happened and it was awful. Nothing could have prepared me for the pain of this type of grief. So from that point it’s been a journey towards healing. This journey has involved anger, extreme pain, many tears followed by relief, then the whole process staring again. Sometimes it’s involved a time of feeling numb and then angry all over again. But one thing which has been hugely significant is that in the midst of the pain I have the memories of the precious time we had with John Paul and that has been of great comfort.

Where did you find help / information?
The amazing support of my family, friends and the hospital staff.
I have suffered for sure at the death of my baby but I have precious memories of him to hold onto for life. When I put myself back at that moment of diagnosis, I realise that no matter what happened from there, the future held my child passing on and me left to grieve him. This was unavoidable. So the only choice I really had is what role I would play in his short life and what role I would play in his death. This choice has been crucial for my own healing. When I look back, I not only have pain but peace and beautiful memories to give me comfort and assist with healing. If I had had an abortion, I think I would be trying to forget instead of being free to remember. Our family wouldn’t be celebrating his birthday every year and the fact that he is still part of us and always will be. I think I would be plagued by questions about what could have been and I think healing from such an experience would have been a lot more complex.

What would you say to parents out there who have been given a similar diagnosis for their baby?
Firstly, I’d like to say I am so sorry for anyone who finds themselves in this situation. The sad reality is that no matter what happens from here, your baby will die at some point in the far too near future and that is truly tragic.
While the death of your child is part of the path ahead, there are many moments of life also to be had along the way. To be able to remember the birth date of your child and keep mementos is invaluable, as is having a memorial stone/grave to visit as a special place to remember and talk to your child. I have found these small but deeply significant things to be invaluable and I would wish them for any woman who finds herself in this situation.
Thirdly, it is my observation that every child has something unique to bring into the world and also that each child has some handicap, be it small (shyness/lack of confidence) or big (mental/physical). As parents, what we want is to be there to celebrate and show how proud we are of our kids in their strengths and to support them in their weaknesses. There is joy to be had out of both and sometimes more joy to be had out of the latter. With a child like this, the same applies. The handicap is much greater than anything you may have experienced before but there is a distinct joy to be had from being there for every day of your child’s life that you can be there. Also even this child can bring some good into the world and change the shape of a family for the good. I found this in a profound way with my son.
The long term effects it has had on my family because of the closeness we experienced and because of the things I learnt in grieving him are things I wouldn’t swap for the world. They are part of the story of John Paul. He has had a hugely positive influence on myself, my husband and our children. He has even had an impact on our wider family and friends and I am so proud of him for this. He has made his mark on the world.
We are just average people. There’s nothing extra-special about us but when something like this happens to you, it brings the extra special with it if you are willing to take the pain.
Finally, death is part of life. We know this to be the case. We try to live life to the full and accept the inevitability of death along the way. So in accepting this life, short as it may be, you would be doing just that, accepting life, limited as it is. But in choosing to end this life you are sacrificing the life part of the journey. This is a huge sacrifice and could be more costly than you realise.

Was there anybody or anything in particular that helped you at the time?
Aside from the wonderful support of family, friends and hospital staff, which I described above, my faith in God’s love has been a big help. I realised that if He sent this child to me, He would give me what I needed to be his mother. He has done that and much more. 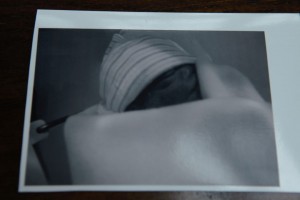