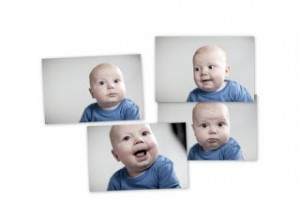 Describe your situation at the time of your pregnancy and your child’s diagnosis.
This story is about our baby Simeon. We had already been blessed with two beautiful children, when we found ourselves expecting another addition to our family. I had had two healthy pregnancies and this one was going just as well. Two early scans had proved that our little one was growing well and developing as expected – the last scan as late as week 17. We were very excited and happy, counting down the weeks until we could meet face to face with baby number three! My next scan was coming up at week 23 and for the first time, since all was going well and we were not worried, we decided that instead of looking for a babysitter for the other two, that I would go into hospital on my own. It was for the first time ever that my husband Noel had missed a scan. And it was on that day 7th September 2011 when I was told the unexpected terrifying news that there was something wrong with our unborn baby’s heart. I just remember how my whole body tensed up still looking at the scan in disbelief and the tears flowing down my cheeks.
We were both called back to the hospital only a few days later to meet with the consultant who confirmed our worst fear that our baby Simeon had a severe heart defect – the diagnosis was Hypoplastic Left Heart Syndrome. We were in shock! I was barely half way through the pregnancy, but all the joy and excitement was robbed from us on that day… and we were filled with anxiety, worry and so much pain instead.

What advice were you given at the time?
We were informed initially that there were two options, either Compassionate Care or Multiple Surgeries. Both options were grim. By taking the compassionate care route our baby would have died shortly after birth within hours or days. With surgery there were major risks involved and no one could predict the outcome. We learned that his heart problem could not be fixed even with all the surgeries, that he will always be fragile, not just physically, and that countless life threatening complications could occur at any stage even into adulthood, if he was lucky enough to live so long!

What were your emotions at the time? Did your emotions or attitude change once the baby was born or over time?
Over the next few months we had to come to terms with our situation and the options we were given. Our strength came from prayer and from turning to God and that is what kept us going. We tried to live in the present moment only as best as we could and take each day as it came, not letting the future worries swallow us. We have two other little children and we had to stay strong.
For the rest of the pregnancy we had frequent appointments to attend both in Dublin and Galway. Before each scan we were hoping to see some improvement at least, but it was the opposite, the situation seemed to have got worse each time and at the last scan before the baby was due we were told that the anatomy of his heart was such that the surgery may not even be an option for us any longer. It was to be confirmed once the baby was born. We couldn’t help grieving for our baby before he was even born.
We had hoped to opt for the surgery but we also had to be realistic and prepare ourselves for the worst. When the day came to go into hospital to give birth to Simeon, we had our funeral clothes packed and we set out on the journey from Clare to Dublin with very heavy hearts.
The 15th of December came and Simeon was born looking so healthy and beautiful. There were about 10 medical staff around us, all ready for action. Once he was born he was given oxygen immediately and then placed into my arms for a few brief moments. We had an emergency baptism, which was so special and I will always remember how everyone in the room prayed the Our Father together – it was a very sacred moment indeed which will remain with us always. Then Simeon was placed into the incubator and was shortly afterward was taken to a children’s hospital for a full assessment. It was late that evening that we got the word that he was a perfect candidate for surgery! There were tears of joy… we did not want to lose him!
Today Simeon is 6 months old and has already been through two open heart surgeries, first one when he was just 4 days old and the second when he was 4 months old. Last February he also suffered cardiac arrest during his routine MRI scan. This came as a major shock to us and was a reminder of how serious his condition is. Thankfully he bounced back quickly and truly showed us once again his fighting spirit and strong will to live.
Simeon’s journey has been by far the toughest experience of our lifetimes. Our hearts broke each time we saw him suffer going through his surgeries. His tiny little body hooked up to so many machines and fighting to stay alive with all his might, giving it his all. As parents we felt so helpless, just praying in silence at his bedside, hoping our prayers were heard, whispering into his ear – we love you, be strong…

What would you say to parents out there who have been given a similar diagnosis for their baby?
His young life has truly inspired us. We have never looked back at any stage at our decision in regret. He brings such joy to our family, his smile melts our hearts and the blessings we have encountered go beyond words! He is a very special little boy with an incredible story and who has touched so many people all around the world. Yes, we feel so privileged to be his parents!